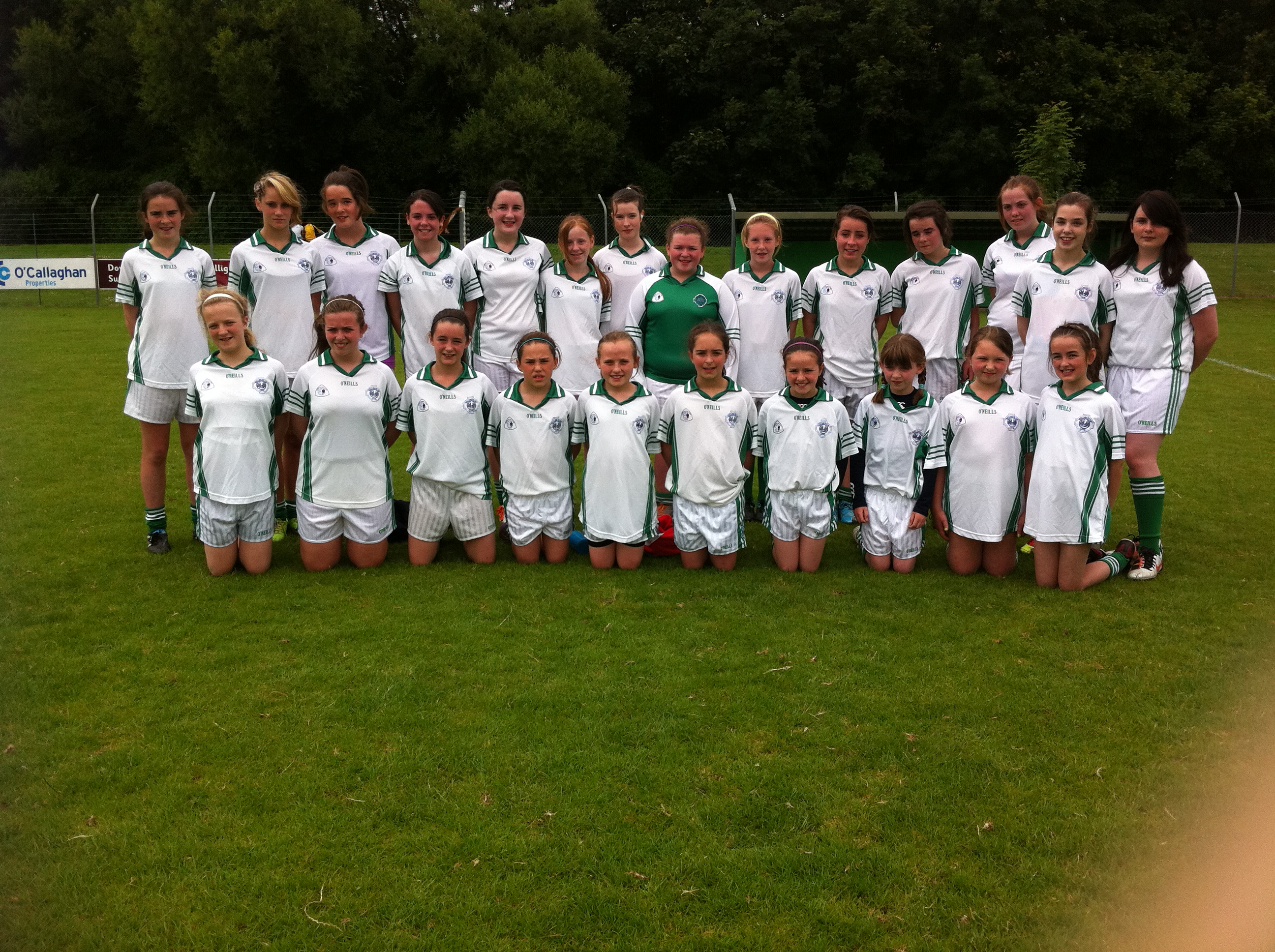 On Thursday 30th June our visiting team from Roscommon, St Ciarans arrived and we made them welcome and played our opening FÃ©ile match in the afternoon. Later we proceeded to the parade, assembling in the UCC Mardyke and parading up to the Grand Parade, past the dignitaries outside the City Library. The girls even enjoyed the wait in the park taking time to explore adjacent groups in the true spirit of FÃ©ile! Our visitors the Rossies were behind us in the parade, and were definately in contention for the loudest group in the parade for sure! They are FÃ©ile veterans and were in great voice all the way through Cork! Our thanks to all the Ballincollig supporters who attended the parade, and helped with the team & stewarded. 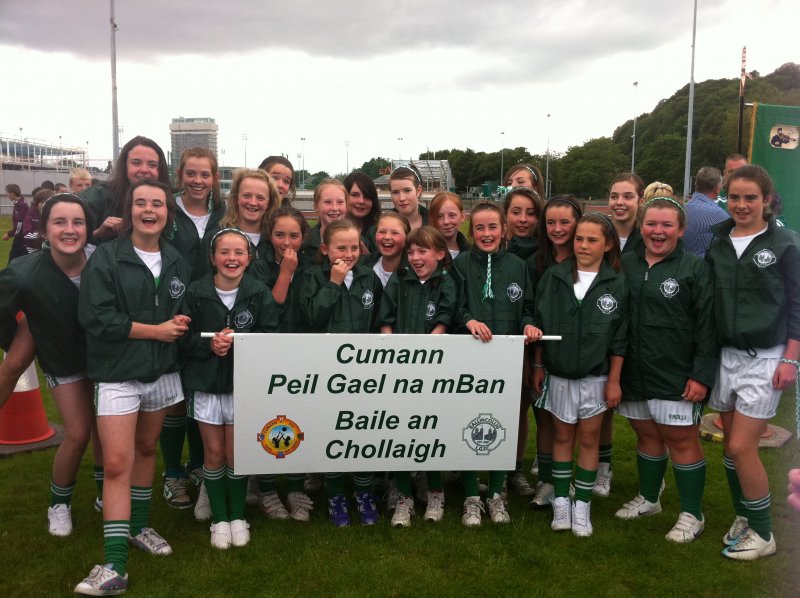 On Friday morning, 1st July, our group was completed by the arrival of Banteer Ladies and their visitors, New York Ladies. It was all business down at the GAA from 9am on! Four matches were played in the morning blitz, in fantastic Ballincollig weather, so everyone had played everyone else on the group by lunchtime Friday!  Banteer & Ballincollig played a cracker of a match, ending in a draw. The two stronger teams St Ciarans & New York played out a thriller qualifier match, trading the lead several times in the last few minutes of the game, and giving their supporters & all in attendance an amazing match. Only one team could proceed to the semifinals, and New York devastated the Rossies dreams, by leading at the long whistle.
The Skills Competition was held between the matches, with one player from each of the four teams competing for the semifinal place. We had held a competition for the club representative before the FÃ©ile, with Maria Delaney completing the best skills score! She did us proud!


Ballincollig was also selected as the National FÃ©ile Semifinal venue for Division 4 Ladies Football on the Friday afternoon. Dungarvan Ladies arrived to play New York in the first semifinal and Bandon played SeÃ¡n O'Heslins of Leitrim.  Dungarvan and Bandon emerged victorious at the semifinal stage, with Dungarvan clinching the Division 4 title on Saturday.  The FÃ©ile Skills Competition Division 4 Semifinal was also held with Aimee McErlean of Glen, Co Derry emerging as the Division 4 Skills representative at the Finals at Pairc UÃ­ Chaoimh. The entire day passed with out incident, and many happy, if toasted, players, parents & supporters. 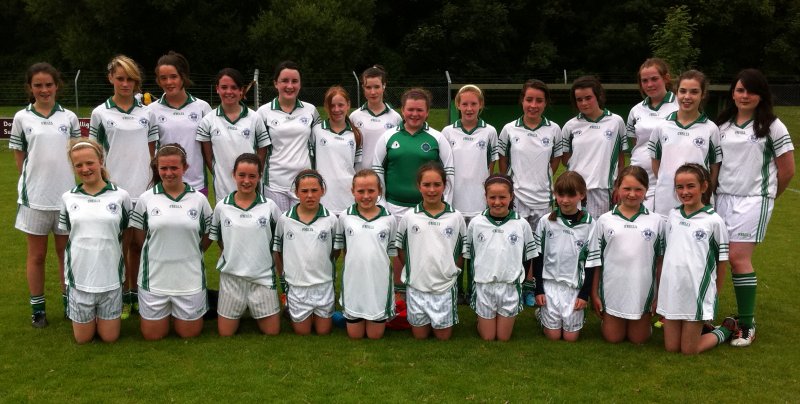 Full Squad on the Pitch Before their First Game

From early on Friday, an intrepid posse of Ballincollig Ladies Football volunteers were busy preparing catering for all visitors, and kept the tea, coffee cakes & sandwiches coming until the last match after 7pm. All the help was appreciated by the club with many hands making light work.   Thanks to all who contributed to the club bake sale.

Our thanks to all individuals who spared a few hours to make sandwiches, pitch duties, sold cakes, etc.  Thanks also to all the business organisations who gave generously when asked to contribute to the effort! Ballincollig Ladies Football Club wishes to express thanks to all who helped out in any way.  The Ladies Footballers of Ballincollig really appreciated the help! A special thanks to Ballincollig Gaa brains for their guidance and assistance, especially Richie, Liam & Terry.

Home after the morning blitz to rest, relax & a spot of shopping for some, with the St Ciaran's ladies experiencing suburban life, different from home.  Time after dinner to spruce up and a great evening's entertainment was enjoyed in the Ballincollig Gaa clubhouse. Our girls and the lovely Rossies were joined by Ballincollig's finest FÃ©ile boys squad, together with their visitors Craughwell.  A table quiz was followed by a disco. Thanks to Stacey for the excellent quiz and Ben Noonan for the excellent disco.  All four clubs exchanged mementos of appreciation, which will be on view permanently in the Ballincollig Gaa clubhouse.

The event was a major improvement in Galway/Roscommon/Cork relations, in many eye-opening ways!  Unhindered by any Finals participants among the four teams, the dancing went on late in the evening, with few parents braving the dance-floor! Amazingly no-one was injured by the way! Some trainers said that they had never seen some of the players move so fast at training!

Sad goodbyes were exchanged early on Saturday with the visitors heading home, with a stop in Tullamore promised for a spot of shopping! Doubt ye, Rossie girls!

It was a great event overall for the U14 Squad who enjoyed participating in FÃ©ile na nÃg 2011. As it may be another 25 years before FÃ©ile returns, for most of our girls have had their unique FÃ©ile experience!