Under 14 County Champions Celebrate in style

You are here: Home / Under 14 County Champions Celebrate in style

Under 14 County Champions Celebrate in style 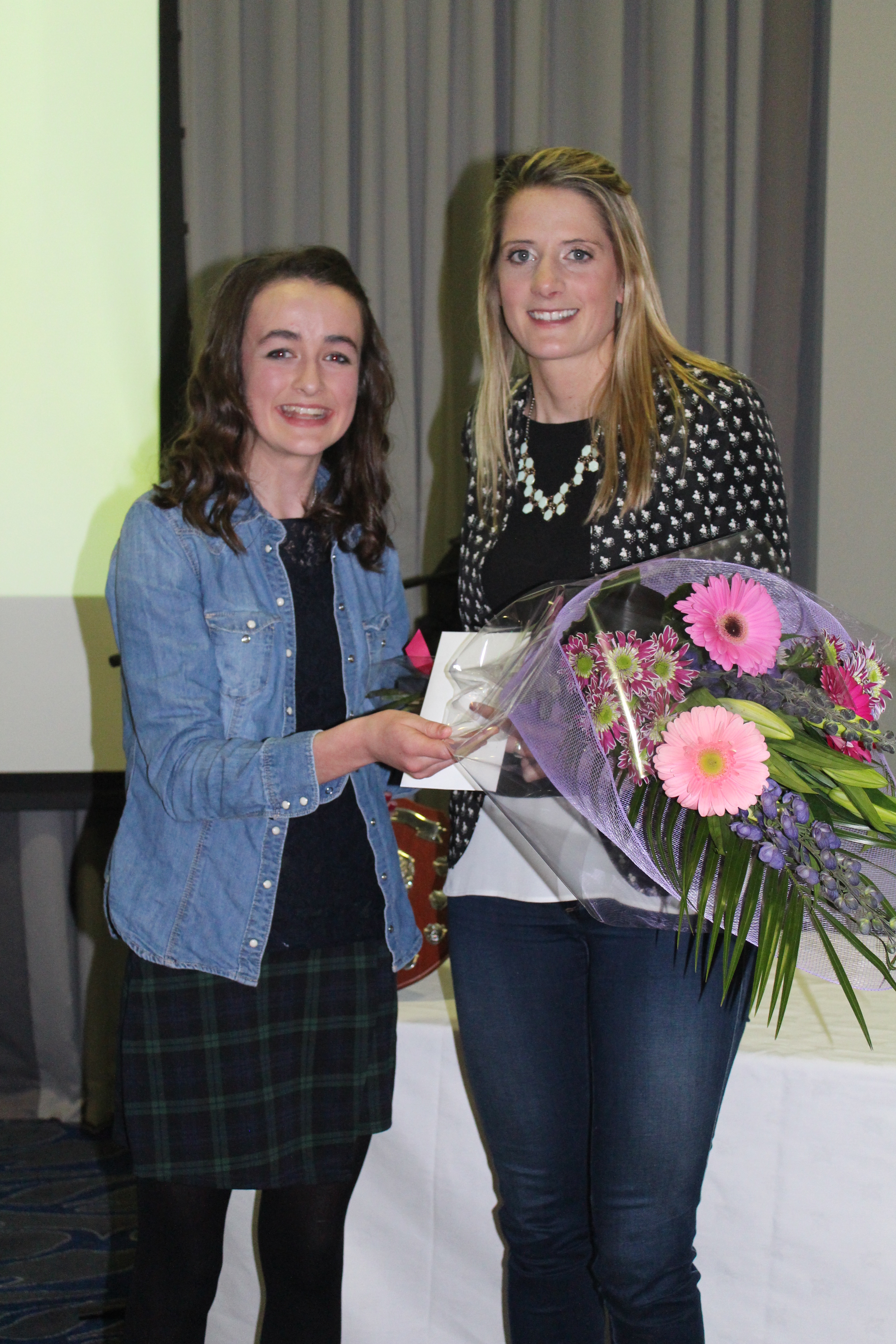 After Ballincollig Ladies Gaelic Footballâs very successful year in 2014, we celebrated our achievements in style last Friday night at our Awards Night in the Oriel House Hotel. The highlight of the night was our fantastic Under 14 County Champions receiving their County Medals, which were presented by Cork Superstar Juliette Murphy. Juliette spoke to the girls about the importance of playing sports for physical and mental well-being, describing how the discipline and experiences of playing football follow right through in every aspect of your life â benefiting school, college and decisions youâll make as you grow older. The Cork Superstar, who has never been carded in her long career then presented the Panel of 31 girls with their medals on the night.  Members of Ballincollig GAA, Ballincollig Camogie Club, local businesses, Fr. George, family and friends all joined in to congratulate the club on this superb achievement in a year that also saw Ballincollig LGFA awarded Tesco Home-grown Club of the month for July.

The road to success was recollected by Manager Aileen O Flynn, describing how two Under 14 teams competed in this years Mid Cork League, with Foireann BÃ¡n winning all of their 6 matches, bar drawing one with Bishopstown. They finished the League top of their group.  The two teams merged together for many Challenge matches throughout the year, for the FÃ©ile Qualifiers in April, which our club entered for the first year ever and of course for the County Championship.  Every girl on the Panel had plenty of match practice which stood out during the Championship Campaign. Unfortunately, we lost to Grenagh in the Semi Final, on an evening that we were missing a number of players due to injury, and with players playing out of position, we let in 2 soft goals in the first half and never truly regained our footing â but thatâs the way it goes.  It was felt by the management of the team that in a strange way, losing to Grenagh had a positive effect on the girls heading into the County Championship as they knew they could play well, they knew they were a great team and were determined not to taste defeat again.

Abi O Donoghue captained the team to the quarter final, which saw us playing Watergrasshill at home, a game we won by 6 points.  Castlemagner was the venue for the County Semi Final against a favoured Knocknagree team. Both teams were very evenly matched, with the first half ending in a draw at 1-3 a side and with a coveted place in the County Final up for grabs, Ballincollig dug deep and won by 3 goals.

The anticipation was growing week on week in the club, right to middle of June. Great skills together with superb team play had brought the team to the Final. Beara were a physically stronger team and the girls really took some very strong knocks. We were lucky in that we knew that we had a great bench with each and every girl on the bench willing and capable to play at anytime. Even though we were a physically smaller, younger team, we were fitter, more determined and more skilful and it truly was a textbook team effort that won on the day. The Ballincollig u14 Ladies were County Champions with a Full-time Score: Ballincollig 3-7 Beara 1-7

Great credit was given to the girls on the night for their commitment to their team, attending all training sessions and their eagerness to improve their own skills and their team play.  Paddy Lucey (Chairperson LGFA) also thanked the parents for encouraging the girls and the commitment that they made in getting them to training and matches.

Former Chairperson and Founder of the Club, John Fitzgerald was acknowledged for his contribution and his years of dedication to the club. âA guiding force over the course of the yearâ, he played a crucial role in shaping this team that has brought us so much success in 2014. He was always generous with his time and was always there for help, guidance and advice. The girls have endless respect for John and it was a great boost to their confidence when he was on hand at all their matches. They trust his judgement and listen to his instruction. The development of our club has come about because of the central role he plays. Captain of the U14 team, Abi O Donoghue presented John with a token of appreciation from the Club.

In addition to John, the role of many others in shaping this team was acknowledged.  We had the huge asset of Jim Lordan, Jim Moriarty and Aileen O Flynn mentoring the teams and with other mentors (Maria Nic CÃ¡rthaigh, Norma Dineen and Tony OâMahony) helping out at training sessions, the girls really sensed that the Adults in the Club had great faith in them and they got encouragement and confidence from that.  Thanks also to Norma for helping with all the first aid issues over the year both at training and at the many matches. Aileen O Flynn, Under 14 Manager was presented with a bouquet and token of appreciation for her work and commitment to the team and the club over the year.

Seamus O Callaghan, Chairperson of Ballincollig GAA expressed to the girls to savour every moment of their fantastic achievement, as a County success is not an easy achievement and should be treasured.  The presence of the County Senior Footballers Cup also added to the occasion.

Ken Quinn and his local business Ballinbuilt was thanked for his generosity in supplying all 31 girls on the Panel with County Jerseys ahead of the County Final.  âWe definitely were the best dressed group of girls heading to a County Championship this year.â

Fiona Linehan a member of the U14 team, took to the floor to thank all the mentors and the club for all the work and commitment that had been put into the team to help them achieve this great success story.

Looking to 2015 the future certainly looks bright with 11 of our girls heading up to U16 â joining an already great group of girls at that level.  Next year we have an estimated 27 girls on the Under 14 Panel and we learned in recent weeks that one of the Panel Ava Lordan has been selected for the Under 14 Cork Panel. Maith thÃº Ava.

After Juliette spoke about how you never regret going training and how you always feel great after a training session even though it might have been difficult to get up from the fire and put those boots on, the girls were informed that it was back to training on Monday night with Under 14s training from 6.30-7.45 and U16s from 7-8. New members are always welcome.

The girls and their families boogied away late into the night and it truly was a night to remember.  Many thanks to the Oriel house Hotel for their proffessionalism in organising a fantastic night.