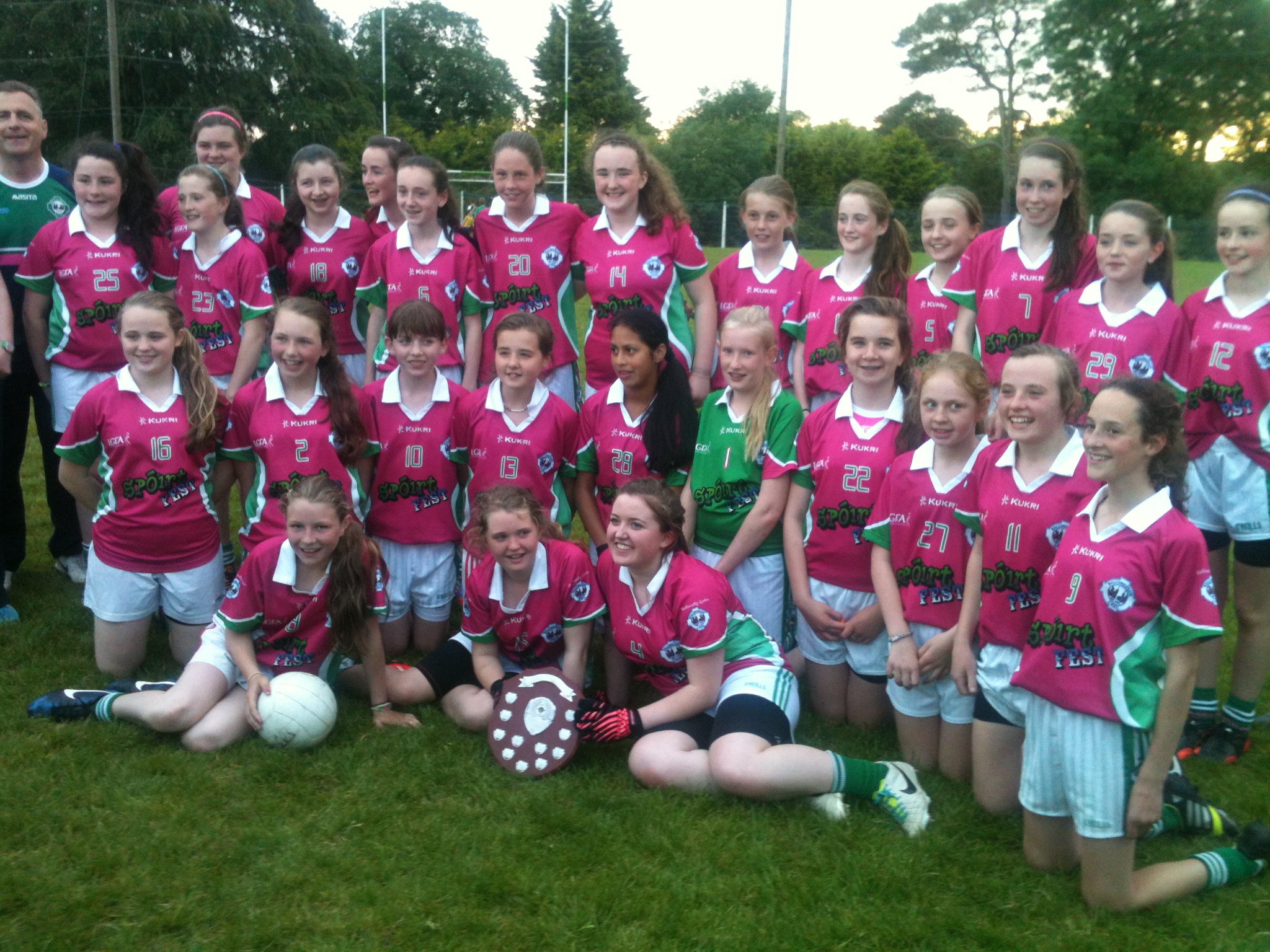 In a superb display of teamwork and determination, our young U14 team captured their first taste of County glory in style on Monday in picturesque Drimoleague, on a beautiful sunny summer's evening.  It was the first U14 title for the club since 2005, before any of the current batch of County Champions were even old enough to train with the club, but this group of players have showed considerable promise in recent years.

The anticipation had been growing in the club all year, as the girls had advanced through the County campaign having finished strongly in the Mid Cork qualifier stages. Watergrasshill were brilliantly defeated in the County Quarter Final at home and a trip to lovely Castlemagner was the venue for the County Semi Final against a favoured Knocknagree team. Great skills together with superb team play had brought the team to the Final.

Beara started the match with enthusiasm, breaking the ball down and scoring a brace of quick points to open their account. Grace Oldham and Caitlin Quinn were relentless in defence, soaking up a lot of the intense Beara pressure. Orla Keating, Fiona Linehan and Orla NicCarthaigh gave powerful performances, pushing forward and deflecting ball away from the half-back line time and again. Following a heavy tackle Fiona had to be replaced by Ashleigh Oldham at the ten minute mark. Orla Nic opened the Ballincollig account with a superb point, and Ballincollig kept resisting the Beara pressure.  A harsh tackle on Orla Keating earned a 10-minute sin-bin on the side-line for the Beara No 8.

Kara Lacey, Erin Taylor and Ciara O'Sullivan in the full-forward line helped immensely with the set-up of scores throughout the game. Hannah OâLeary and Ruby LeFeuvre were fabulous in midfield, working hard to combine defence and attack. Ava Lordan at centre-back coped with every attack Beara brought through the centre. Molly NÃ­ GhrÃ¡da, Molly O'Flynn and Captain Abi OâDonoghue swept up any ball fresh from Beara forwards and cleared their line. Orla Nic pointed again, and with two lovely points scored by Ruby, Ballincollig trailed by only two points at half time.

A recovered Fiona was re-introduced after half-time, and to the delight of the Collig crowd she was rewarded with a well-taken goal after ten minutes. Beara were kept scoreless for the first twenty minutes of the second half, while at the other end Ruby was popping points and Fiona palmed a goal that seemed decisive. The gap was increasing between the teams, as the fitness of the Ballincollig team began to shine through. Yet another heavy tackle on Orla K meant she had to be helped to the side-line and be replaced by Ciara Lee. Kate Walsh and Aisling Dore were introduced for Erin and Ashleigh.  A goalmouth kerfuffle led to another Ballincollig goal, scored by Ruby. Aisling Keane, in goals for Ballincollig did her job perfectly, including  a crucial save in the second half, when Beara looked like they were coming back into the match, with a goal. It proved to be too little too late as Aisling Dore popped a final point for the Mid Cork Ladies to complete their scoring.

There was plenty of talent on the bench also, which bodes well for U14 Ladies Football in Ballincollig in the future. New players are always most welcome!!

The final whistle blown by referee Eoin Byrnes was welcomed with delight by players, mentors and the many vocal supporters from Ballincollig. The younger and physically smaller team had won the day though excellent skills and determination. It really was a textbook team effort!

The County was represented by Jerome Casey, Treasurer, who presented the trophy to a delighted Abi, who accepted graciously on behalf of her teammates.

A special thanks to BallinBuilt who kindly sponsored lovely jerseys for the County Final, they look brilliant, worthy County Champions!

The local schools who also train the girls in Gaelic Football are also to be thanked, with the trophy visiting Gaelscoil UÃ­ RÃ­ordÃ¡in, Scoil Mhuire and Scoil Barra during the week to show their appreciation.

The Ballincollig U14 County title completes a Mid-Cork sweep of the boards in U14 Ladies Football County titles this Year with St Vals, Nemo, Bishopstown and ourselves  all winning County titles.  Our congratulations to all teams and clubs involved!

One of our U14 Ballincollig team, Orla NicCarthaigh will play for Cork at half time in PÃ¡irc UÃ­ Chaoimh next Saturday night as a member of the Cork Primary Team, when Cork Footballers play Tipperary in the Munster GAA Football Championship Semi Final. Have a wonderful night Orla!