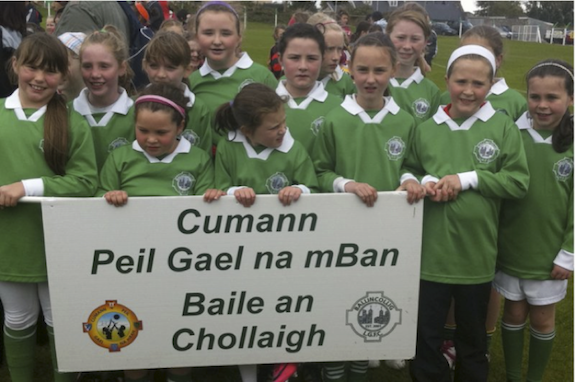 Ballincollig Ladies Football Club would like to welcome back all our Mentors and Players after a well-earned Christmas / New Year break - all well rested and eager to get back to training! It was back to business at our AGM, which was held on the 26th January.  The successes of the year were recalled, and a new committee was appointed as follows:

All registrations are now due for the coming year and a Registration Day will be held in the GAA Hall at the end of February.  With numerous enquiries as to when training is back, we know we will have great panels full of eager players keen to get going.

Under 10:    Training will resume for these girls on the first Monday of March (5th March) from 5.30 â 6.30.  Maria and Aileen would like to take this opportunity to thank our great panel of girls for all their energy and enthusiasm over the past year and we are looking forward to seeing you all again at training in March.  Last year was a great success, with our panel nearly doubling in numbers.  This great bunch of girls participated in a number of blitzes throughout the year and even got to meet members of the winning Cork Team and hold the Brendan Martin Cup. Training continued indoors for a few weeks and this was a great opportunity to brush up on skills. New members are always welcome at all age levels â so we are looking forward to seeing new faces and making new friends.

Under 12:    Training will resume on Monday, 13th February from 6.30 â 7.30 on Pitch 3 and again on Thursday, 16th February from 6.30 â 7.30 on Pitch 3.  Some new faces will be joining this panel, as a number of last yearâs Under 10 girls are now moving up to under 12âs.  This team has great energy and enthusiasm and enjoyed several matches last year. Indoor training was a great success for these girls also, who fine-tuned their skills.  They will train, as before with Deidre, alongside the Under 14 girls.

Under 14:    Training will resume on Monday, 13th February from 6.30 â 7.30 on Pitch 3 and again on Thursday, 16th February from 6.30 â 7.30 on Pitch 3. Last year was a very exciting one for these girls, who along with some of the Under 12 panel took part in the Feile Peil na nOg, where they played teams from Roscommon, Banteer and New York. They finished up their season by holding a friendly blitz and fine-tuning their skills at the indoor training.

Under 21:    Training will resume on Monday, 13th February from 7 - 8 on Pitch 3.    This team had a great year in 2011, giving an amazing performance against Carrigtwohill to win the County Final.  Congratulations to all involved â we are eagerly looking forward this year to more great performances.

Junior Team:    Training will resume on Monday, 13th February from 7 - 8 on Pitch 3.  Last year, this team, playing in the 13-a-side Junior A Grade, gave a fabulous performance and succeeded in winning the County Final. Congratulations, once again to all involved and hereâs to another successful year in 2012

We would like to extend our best wishes to all our girls who are enjoying the Cork Under 18 Selection process at the moment.

New members are always welcome at all levels â even if you have never played before â donât let that put you off as full training will be given to bring you up to speed!!

Congratulations to the Cork Senior team who defeated Donegal last Sunday to kick-start their 2012 campaign.  They will play Monaghan this coming Sunday in Whitechurch at 2pm, which will be a repeat of the 2011
All-Ireland Final.  A game not to be missed! Under 16âs admission is free.