You are here: Home / U14 Football Win 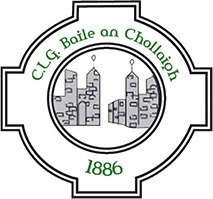 Our U14 footballers had a great win in the challenge cup final against an excellent Mallow side last Sunday.

We had a very lively start and were 4 points to 1 up before we conceded a goal. We rallied well and after a lucky goal of our own and we went in 1 08 to 1 04 up at half time.
In fairness to Mallow they threw everything at us in the 3rd quarter. Ballincollig were always able to stay a few points ahead and a Darragh Lee goal with 10 mins remaining left us in a good position. Ballincollig finished the game very well to win on a final score of 2 10 to 1 10.
A really solid team performance, starting with our keeper James o keeffes excellent kick outs, with Aaron Hurley at 3 and the outstanding David O'Leary at 6 anchoring a very solid back line.
Ably assisted by Sean delaney and Shane O'Sullivan in the full back line, while wing backs George Howard and Charlie Summers were dominant.
Cillian Power put in a huge shift in midfield, as did his midfield partner Ben O'Regan. Up from Adam Dodd, 5 points, Darragh Lee, 1 01 and Eoin Dwyer, 1 02 were the main scorers. While Theo Morgans work rate was a huge part of the win. Jack Murray and Conor Lee put in excellent work for their team mates also.
The introduction of Ben O'Connell and Jack O'Sullivan had a big baring on the result.
Great win lads and a great game of football.
Scroll to top